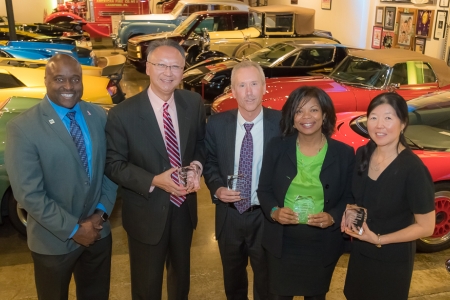 March 21, 2017 - The Samueli School of Engineering and the Bren School of Information and Computer Sciences recognized 11 distinguished alumni at the 2017 Hall of Fame Celebration held last month at the Marconi Automotive Museum in Tustin. About 200 people attended the event, enjoying cocktails and hors d’oeuvres as they wandered among the museum’s classic, historic and exotic cars.

Established in 2015 as UCI was celebrating its 50th anniversary, the Hall of Fame honors engineering and ICS alumni for extensive personal achievements and significant professional contributions.

Washington told the crowd of alumni, “Our two schools are hitting it out of the park. Twenty-five percent of those who apply to UCI apply to engineering or ICS. This is not your father’s UCI. The value of your degree is worth more today than it ever has in the history of the institution.”

The program included two featured speakers. Engineering honoree Mark Christoffels ’83 shared with the audience that at the time he graduated, he didn’t appreciate all he had received. “What I got was a piece of paper saying I had an engineering degree. It allowed me to get a job, a car and a well drink at happy hour,” said the CEO and chief engineer of the Alameda Corridor-East Construction Authority.  A civil engineer, Christoffels has worked in local government for more than 30 years. “I really had no idea until I got out in the real world and used what I had learned that I realized it was a gift.”

ICS honoree Jennifer Woo Pascua ’03, a program manager at aerospace contractor Thales Group, also was appreciative. “Tonight I finally have the opportunity to say thank you, for preparing me for life.” Pascua led her team in the successful delivery of the company’s first B787 aircraft to Japan following the 2011 tsunami, an effort that received recognition for aiding that country in their post-disaster recovery. “Thank you, UCI, for giving me this opportunity and helping prepare us to go out into the world.”

Engineering honoree Joan Wada ’85, an electrical engineer and technical fellow at the Boeing Co., had a table full of family and friends on hand for the event. Wada has had an extensive engineering career in the defense industry, is author of 17 awarded patents and was recognized as the Asian American Engineer of the Year in 2007 by the Chinese Institute of Engineering. She recalls her UCI experience fondly: “The thing about college is the lifelong friendships you make.”

Congratulations to the 2017 Hall of Fame honorees: